Schedule & Speakers of the Ramstein Demo June 10th-12th – JOIN US!

10. April BERLIN
12.00 - ca. 14.30:
Protest CODEPINK and Germans:
Against the participation of the German government
in the illegal US drone killings via Ramstein Air Base
Place: US Embassy Berlin, walk to Chancellor’s Office

14. April BAYREUTH
20:00 – 22:00
Podium Discussion with CODEPINK
„War from Germany – The Use of Drones in the ‚War on Terror'“
Place: Green Party office), Kirchgasse (pedestrian walkway)
No admission charge, donations welcome

15. April BAYREUTH
18:00
Award Ceremony and acceptance speech by CODEPINK
(English with translation)
Wilhelmine-von-Bayreuth Prize for Tolerance and Humanity in Cultural Diversity
Place: Audimax of the University of Bayreuth
Open to the public

17. April KAISERSLAUTERN
15:00 – ca. 17:00
Vigil/Protest near Ramstein Air Force Base
(Place will be announced soon on this website.)

* TOBY BLOMÉ is an organizer with San Francisco CODEPINK.  In 2009 Toby began organizing the continuing annual weeklong protests at Creech AFB in Nevada, where the U.S. Air Force uses armed Reaper and Predator drones for illegal targeted killing in Afghanistan, Yemen, Pakistan and Somalia and elsewhere, including killing for the CIA.  At Creech in March 2015 CODEPINK was joined by four other peace organizations for a „Shut Down Creech“ protest. 150 activists from 20 different states, including over 50 war veterans, participated.  In 2010 Toby also initiated the monthly two-day protests at Beale AFB, a military surveillance base with Global Hawk drones in California. In 2012 Toby and Ann Wright traveled to Pakistan with 32 other Americans as part of a CODEPINK peace delegation to meet with victims of U.S. drone attacks. Toby is a retired physical therapist and former teacher. She mothered two Turkish-American children in a cross-cultural marriage and lived and worked in Istanbul. These experiences helped foster her deep concern about the impact of the US “War on Terror” in Muslim countries.

BARBARA BRIGGS-LETSON is a peace-activist grandmother, retired nurse and lay- midwife.  She has met with drone victim families in Pakistan and knows, deeply, about „collateral damage“ from US drones.  She has protested drone training and piloting at Creech USAFB in Nevada and Beale USAFB in California, and she has spoken against US drone policy with the acting US Ambassador and with Pakistani military officials in Islamabad.

LESLIE HARRIS is a grassroots activist and organizer and Coordinator for CODEPINK Greater Dallas, the North Texas Light Brigade, and Veterans For Peace Chapter 106. As an educator and mother of three residing in Texas, her alarm over the policies of George W. Bush as governor and then as U.S. president propelled her into the peace and justice movement. She is an Advisory Board member of the Dallas Peace Center, a founding member of the North Texas Civil Rights Project, and one of the „Dallas Six,“ a group of citizens involved in legal actions to protect free speech.

MARTHA HUBERT is an activist with San Francisco CODEPINK.  She maintains a weekly vigil in downtown San Francisco, focusing on peace and justice issues such as Black Lives Matter, Climate Justice, Stop Mass Incarceration, Free Chelsea Manning, Free Mumia Abu Jamal, Stop Bombing Yemen and Stop Killer Drones. She has been an organizer and protested multiple times at Beale and Creech Air Force Bases, where she was one of the 34 arrested last spring, her second arrest at Creech.  Martha studied art and architecture and made her living as an artist for many years (marthahubert.com).  Her focus was printmaking, and later, painting. She also volunteers in a residential treatment center for low-income residents of San Francisco suffering from AIDS and is part of the San Francisco Threshold Choir, an initiative of women who sing in hospices and end of life situations (thresholdchoir.org).

JOSIE LENWELL has been an antiwar activist since the Vietnam War. Based in New Mexico, she is a long-standing member of CODEPINK, „a grassroots peace and social justice movement working to end US -funded wars and occupations, to challenge militarism globally and to redirect our resources into health care, education, green jobs and other life-affirming activities.“ Articles on her life as an activist, photographer and psychotherapist are included in the book „Remarkable Women of Taos.“

* ELSA RASSBACH is a co-founder of the German Drone Campaign network (“Drohnen-Kampagne”) and helped launch discussions about the German government’s role in supporting illegal U.S. drone killings via AFB Ramstein. Inspired by participation in CODEPINK protests at AFB Beale and AFB Creech, she was also with CODEPINK on the Gaza Freedom March in 2009 and a delegation to Gaza in 2012. Elsa was born and raised in the US; her father left Germany in 1938. As a student at the  Berlin film academy in the 1960s/early 1970s, she worked with GIs in Germany resisting the Vietnam War. She had a 20-year career as a public television producer and independent filmmaker/screenwriter in Boston and New York, best known for her award-winning work to bring the history of American labor and struggles of black people to prime time U.S. television. Since the 1990s she has also accepted filmmaking and journalism assignments in Germany. After the U.S. invasion of Iraq in 2003, peace activism became her top priority. She works with several U.S. and German organizations, including CODEPINK, UNAC (United National Antiwar Coalition), DFG-VK (the German section of War Resisters International) and Attac.

* ANN WRIGHT is a 29-year veteran of the U.S. Army/Army Reserves and retired as a Colonel.  She also served as a U.S. diplomat for 16 years in US Embassies in Nicaragua, Grenada, Somalia, Uzbekistan, Kyrgyzstan, Sierra Leone, Micronesia, Afghanistan and Mongolia.  She resigned from the U.S. government in March 2003 in opposition to the Iraq war.  In her letter of resignation she mentioned her concern over the unbalanced U.S. policies on Israeli-Palestinian issues. She has protested the wars on Afghanistan and Iraq, the unlawful U.S. military prison in Guantanamo, Cuba, challenged the Israeli blockade of Gaza as a passenger on the 2010, 2011 and 2015 Gaza Freedom Flotillas, the use of assassin drones, the persecution of whistleblowers and U.S. militarization of the world. She is the co-author of „Dissent: Voices of Conscience.“ She has protested at the key U.S. drone base, Creech AFB in Nevada, and been arrested for civil disobedience there. 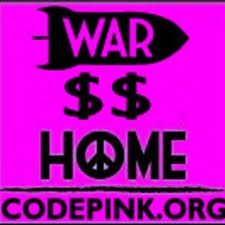